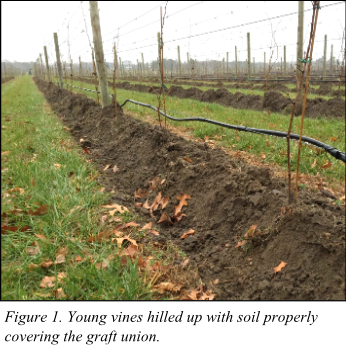 Winter injury is the single most limiting factor to grape production in the Northern United States. In New Jersey, 85% of vineyards reported winter injury following the harsh winters of 2013 and 2014 (1). Extreme cold, widely fluctuating temperatures and late freezes can all cause direct injury to grape buds and stem tissues. Such injury creates opportunities for infection and development of crown gall disease, caused by Agrobacterium vitis. Crown galls typically form on trunks and graft unions, restricting water and nutrient movement from the roots to the canopy, often resulting in vine decline or death. Cold injury and crown gall disease occurs in all types of varieties, however, Vitis vinifera are more susceptible to cold damage compared to hybrids and natives. 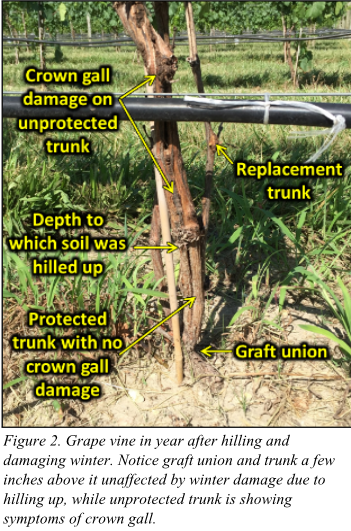 vulnerable to cold injury and, for them, protective measures should be an especially high priority.

One way to reduce the winter injury is to protect the graft union from the cold. When a graft union is damaged the vine is usually a complete loss, as the scion variety either dies immediately, or declines over years after the damage. However, if the graft union is protected (Fig. 1), it is possible to replace damaged trunks with regenerated shoots arising at or just above the graft union (Fig. 2).

Hilling up protects the graft union 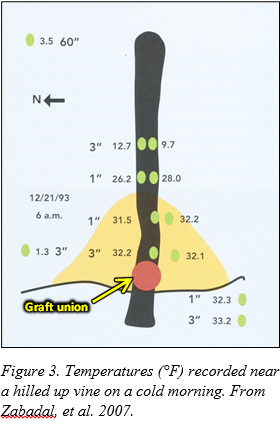 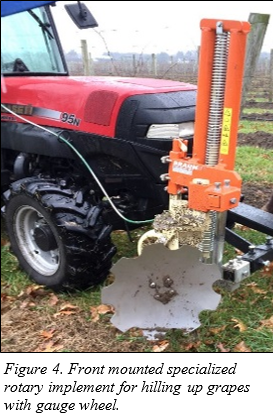 Hilling up can be done manually or mechanically. Tools specific for hilling up are available, however, existing farm machinery can also adapted for this purpose (e.g. vegetable tiller, single plow, disc harrow, etc.). For hilling-up, a hoe can be front mounted, or tailed, or side mounted. One-sided hoes are easier to operate with higher accuracy compared to two-sided, which require very straight rows and the chances of damage to vines are higher if the tractor operator is not very skilled. Hilling up should target creating a soil mound of 3-4 inches above graft union. Depending on the soil type, levelness near the base, and soil moisture during hilling-up, two or more passes may be required to get all the grafts well covered. Vines with uncovered graft unions after the second pass may not have been planted at right depth. Although a machine, like the one shown in Figure 4 can cost up to $7,000, it is less than the cost of re-planting an entire two-acre vineyard. Single blade plows or hoes are the simplest and least expensive implements, however, a single pass may not throw sufficient soil to cover the graft union. Narrow bladed plows or hoes require special care to use because they lift less volume of top soil with each pass and can create clods. With any tool be careful not to dig too deeply as you may damage the top roots of the vine. A specialized implement with single notched disc (Fig. 4) can prevent clod formation and, with two passes, can be as effective as a 2 or 3-disc plow. 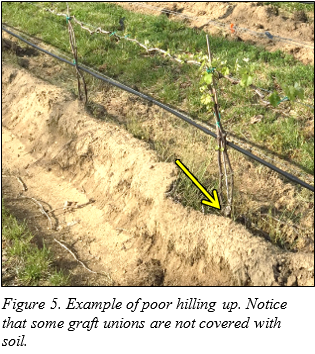 Hilling up is recommended during early fall shortly after harvest. Late fall hilling efforts may encounter hard frozen ground that is too hard to work. The right time for hilling up is when the soil is not frozen and neither too dry nor too wet, and easy to work. Soil with large clods will not form a solid continuous mound necessary to protect the vines. Raise your drip lines before hilling to a sufficient height to avoid damaging them. Crooked or bent trunks are prone to damage from the hilling operation and should be tied straight before hilling. Hilling up requires care to make sure that the graft union is well covered (Fig. 5). One can easily damage the trunk if the equipment touches the vine, opening wounds for Agrobacterium infection at the next cold event.

Taking down the hilled up soil requires even more care and often more labor than hilling up. Specialized implements with rotary brushes are available for taking down hilled up soil around vines. Taking down the soil in the spring is necessary for weed management. Remember, that crown gall causing bacteria are ever present in the vines and take advantage of callusing or recovery process after injury. Damaging the vines during hilling up or taking down can be counterproductive and result in damage to the vine as well as crown gall infection.